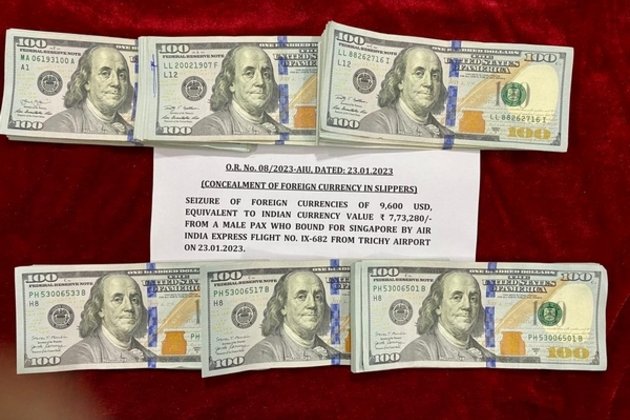 Trichy (Tamil Nadu) [India], January 23 (ANI): Customs officials at Trichy international airport seized foreign currency of 9,600 USD from a male passenger about to board a flight, officials said on Monday.

The Air Intelligence Unit (AIU) of the customs department checked a male passenger who was about to board a Singapore-bound Air India Express Flight owing to suspicion on January 23. They found 9,600 USD equivalent to Rs. 7.8 lakh in Indian currency.

According to officials, during the search, the foreign currency was found concealed in slippers.

In December 2022, the Customs Air Intelligence Unit (AIU) intercepted a man and seized two gold biscuits, valued at over Rs eight lakhs, concealed inside a tin at Trichy Airport. The gold pieces weighed 147.5 grams and had a purity of 24 carats.

Earlier in November, Trichy airport officials seized one piece of gold weighing around 145 grams from a female passenger at the Tiruchirappalli airport.

The gold piece was worth Rs.7,74,590 and had a purity of 24 carats. The officials extracted the yellow metal from 169 grams of paste-like materials concealed in the rectum of the female passenger.

"The female passenger arrived at Tiruchirappalli airport from Kualalumpur by Air Asia flight no-AK-23 on November 15," a statement said. (ANI)