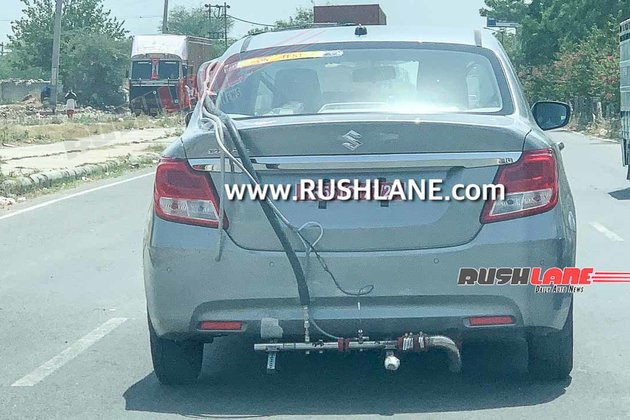 Continues Testing Ahead Of Launch

Maruti Suzuki has been working on expanding its CNG lineup and is expected to introduce new models in the near future. The company is currently testing the CNG variant of Dzire which is likely to be added to the portfolio next. In another case, a CNG-powered test mule of the subcompact sedan was recently spotted.

The latest set of spy shots have been clicked by automotive enthusiast Harpreet Singh. The undisguised test mule was spotted wearing a silver paint job and carried an emission testing kit. Rear suspension unit is seen pressed as well. It appears to be the same prototype captured on camera earlier.

Currently, the Indo-Japanese carmaker doesn't have a single diesel powertrain offering in its lineup and it intends to make up for their loss by expanding its CNG lineup. The carmaker presently has six CNG-powered models in its passenger vehicle lineup including WagonR, Celerio, Ertiga, S-Presso and others.

All diesel-powered models from Maruti were discontinued in April last year when the stricter BS6 emission norms kicked in. Prior to the updated emission standards, Dzire was offered a 1.3-litre Multijet diesel oil burner which delivered an output of 89 bhp and 200 Nm of peak torque.

In its BS6 form, Dzire is now only a petrol-only model powered by a 1.2-litre K12M Dualjet motor. This unit kicks out 89 bhp and 113 Nm of peak torque and is mated to either a 5-speed manual or a 5-speed AMT gearbox.

CNG powertrains make more sense in the current scheme of things with an exorbitant rise in fuel prices in recent times. While CNG power plants do not offer the punch of a diesel or a petrol unit for that matter, they do offer better fuel economy than their conventionally fuelled motors.

Maruti's S-CNG lineup has grown over the years. Last year, the largest carmaker in India sold 1,58,000 CNG cars as opposed to 1,06,000 units retailed in 2019. This is despite the auto industry witnessing a severe slump in sales last year due to the Covid-19 pandemic. The company plans to manufacture as many as two and a half lakh CNG vehicles this fiscal.

Given Maruti's targeted sales volume for its S-CNG lineup, it wouldn't be surprising if the company also launched CNG-powered variants of Swift and Baleno at a later stage. Upon its launch, Dzire CNG will take on the likes of Hyundai Aura CNG. Reportedly, Tata Motors is also planning to launch a CNG version of its subcompact sedan Tigor. The CNG option on Dzire is likely to be offered in the mid-spec VXi variant onwards.